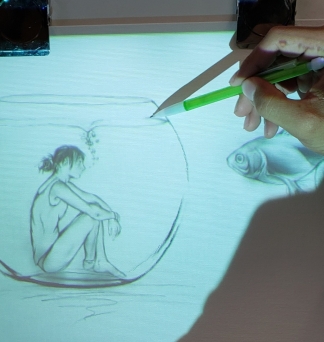 This week, two girls had a fight in the cafeteria.  We found that it had been instigated by other students, and stemmed from unkind posts on social media.

The issue for me wasn’t the fight; we quickly broke up the fight and held a mediation between the students involved that was successful.  The issue was that a large number of our 9th and 10th-grade students cheered on the fight.

Earlier in the year, we had spoken to our students about integrity and how it relates to not encouraging a fight.  I was disappointed that the students had cheered on the fight until a friend reminded me of “rubbernecking” in traffic: “That’s just what people do.  Remember how in traffic, people slow down when there’s a car accident because they want to see the accident.   It’s not always because they actually need to slow down, it’s just that human curiosity.”

I also remembered that the students are kids—and kids will do anything to fit in.  Ultimately, we just need to create a culture where “fitting in” means acting with integrity.  I noted that most of our 11th and 12th graders had no interest in cheering on the fight.  Maybe that was a sign that over time, we were creating that culture of integrity.   We just had to be conscious to keep re-creating that culture with our younger students.  While I saw we could also spin this situation as “don’t ever fight,” I saw it as a wider opportunity to teach students that sometimes unexpected events happen, and it’s the actions of the group in those events that makes the difference.

The day after the fight, we held all of our 9th and 10th grade students in their classrooms during their lunch period and had sandwiches delivered to them.  Normally, teachers have meetings during student lunch.  However, the teachers agreed to hold the students in the classrooms and lead a discussion with the students on how to how to behave during a fight.   The teachers and students talked about standing back and not encouraging the fight, and allowing adults and security agents to break up the fight.

As I was circulating to the different classrooms, I saw different levels of engagement: most classes were listening and participating in the discussion.  A few students in a few classes were arguing with the teachers about staying in the classroom during lunch, and some students were trying to leave to go to the cafeteria.  However, the teachers persisted so that by the end of the period, the vast majority of students had engaged in the discussion.

Somewhere in my travels, a 12th grade boy from student government found me and started to accompany me to classes.  I invited him to speak to the younger students.  “Hi, I’m the 12th-grade student government vice president,” he told the students.  “In our school, kids don’t fight a lot but when they do, we step aside and let the adults break up the fight.”  I remembered that this student had regularly gotten himself in trouble in the 9th and 10th grade.  His leadership reminded me that it takes time to build a culture around respect and integrity, and that we have to intentionally build that culture every year.

I was also touched by the teachers’ willingness to suspend their teacher meetings and work with the students.  Their normal activity of meeting with colleagues to discuss teaching is invigorating and pleasant.  Holding 25 teenagers in a classroom during lunch and talking about respect and integrity is a challenge.  My support staff also suspended their normal schedules and patrolled hallways and delivered lunches.  Even our improv teaching artist Andy Schneeflock suspended his usual lunchtime improv club and helped deliver the lesson around integrity.  I saw again how a culture is built over time but it start with the adults, and my staff’s willingness to do what was needed is what ultimately creates a climate of leadership and integrity.

5 thoughts on “After a fight”