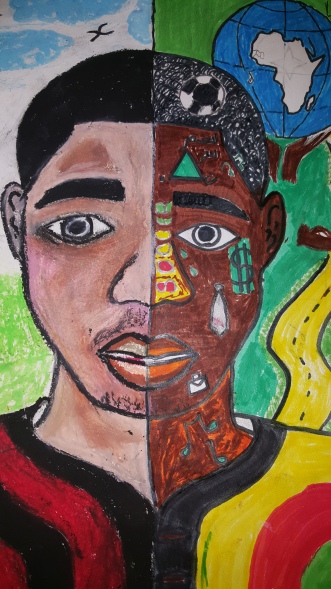 Self-portrait created by a student at the High School of Language and Innovation.

“I don’t like social studies class,” Michael told me. Michael is a 9th-grade student from the Dominican Republic. “The kids at my table speak Arabic too much.”

Looking in on a class in my school, you’ll see groups of students composed of different cultures sitting together. Our school is for English Language Learners from all over the world. Complaints and situations like Michael’s are common, especially in 9th grade when many of the students are recent arrivals to the country meeting different cultures for the first time. We purposefully group students of different cultures together to promote the use of English, which can be tough at first as students are learning the language.

Last year, we started doing cultural celebrations in which students produced a schoolwide assembly around the history, music, dress, and values of their own cultures. We celebrated the cultures of Latin America, Africa United (our students come from many countries in Africa), Bangladesh, Yemen, and Albania, among others. The assemblies did a lot to create community and respect among the cultures. And over time, we do see students bonding more within classrooms across cultures. But the cafeteria still remains the same: students love to sit with friends from their own cultures.

This past week, there was a nationwide student walkout around the Parkland, Florida school shooting. The walkout highlighted to me how immersed my students are in their own cultures as recent newcomers to the country. I work on a campus of five schools, and my school is the only school especially for newcomer English Language Learners. Hundreds of students from the four other campus schools mobilized for the walkout in an organized fashion. In contrast, about 50 of my school’s 375 students participated. Most of our students appeared to be only vaguely aware of it.

The walkout began at 10:00 a.m. when my students eat lunch (we call it “brunch”). Near the end of the walkout, a student ran up to me to ask about joining “the protest.” He is an outgoing student who arrived about two years ago from Yemen.

“Oh,” he said. I sensed his disappointment, but only for a moment.

“Did you want to walkout?” I asked.

He considered my question.

“No,” he replied, suddenly cheerful, and ran back to his friends and his tray of chicken nuggets.

He had heard about the walkout and had a vague idea of what it was about, but neither he nor his friends had fully absorbed it enough to participate. It’s not that he or the other students didn’t care. It’s that he is still surrounded by his own culture and much of mainstream American news and social media is “white noise” to him.

And—in my school, students like lunch. To our students, lunch is more than chicken nuggets and apples. It’s friends. It’s home. The students who participated in the walkout got to eat a quick lunch afterwards, but it wasn’t the full 45 minutes of socialization that is so precious to them.

A taste of home

A friend who works at a large bank told me a story. He has a colleague who is Taiwanese and they always exchange friendly conversation. One day, my friend saw his Taiwanese colleague in the staff cafeteria eating with a group of Taiwanese people from different departments. My friend had never guessed that when his colleague left for lunch, he was eating with people from his own culture, experiencing an hour of “home.”

From that story, I saw yet again that our students are not unique in wanting to eat with friends who share their culture. Many of our students are homesick. They miss family members and friends, not to mention foods, smells, music, jokes, and news from their home country. On the surface, our cafeteria is a typical high school lunchtime full of loud, energetic teenagers, but below the surface, it’s 45 minutes of home.

The names and identifying features of students have been changed.