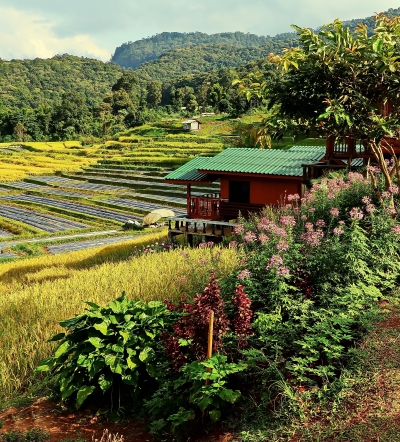 I always thank the substitute teachers who come to my school. It’s a tough job even with the best-laid plans, and requires a lot of thinking on your feet. In our school, the majority of students are English Language Learners, and subs need to find creative ways to communicate and get the students engaged in their work.

Thirteen years ago, I had the most unusual subbing experience of my life. From 2004-2005, I lived in South Korea teaching English at a university. During one my school vacations, I travelled to Thailand. A teacher I knew suggested I volunteer to teach a guest lesson at local school as a way to “give back” during my vacation. I thought it was a great idea.

Once in Thailand, I made my way up to a small village in the middle of the country. I rented a bicycle and set off on a small road until I spotted an elementary school. I figured I could introduce myself and set up a time later in the week to do a guest lesson.

The school was small, open and airy. A boy of about 11 ran up to me and took me up to an office where a frazzled headmistress greeted me. I introduced myself.

“You are a teacher from New York? And you want to teach here?” she asked.

“Yes,” I replied, “Anytime that works for you.”

“OK,” she said. She hurried me down a hallway. “The first grade and sixth grade teachers are running late and won’t be here until the afternoon. We need you to teach those classes.”

She took me into a classroom where about ten 6-year-olds were chasing one another or rolling on the ground. A few minutes later, the headmistress brought the 6th graders to the same room so that I could cover both classes together. A group of students about 11 or 12 years old filed in.

The headmistress left the room. I was alone with the children and wasn’t sure for how long. I didn’t speak Thai, and the first graders didn’t speak English. I had no idea what to do.

At the same time, I felt happy that I was able to help in some way. This was what the school needed at that moment.

The sixth-grade students did speak some English, and had a quiet maturity and humor about the situation that I appreciated.

What should I do?

I had no real way to communicate with the younger students besides using lots of gestures. I taught the little ones some simple numbers in English and then had them practice saying and writing the numbers in a game. Later, I made up another game with a map. To the little ones, I was no one special; I was just the teacher that day who happened to not speak Thai.

At some point, I realized I was having fun.

After a couple of hours, the headmistress came back to the room and dismissed the students for lunch. She took me back to her office and I met both of the teachers whose classes I had covered. They greeted me warmly and laughed about the situation, as did I. I was impressed by everyone’s ability to communicate in English with me.

“Stay for lunch!” they said. I was touched when they opened their lunchbags, and between all of their various containers of homemade food, they prepared a plate for me. It was delicious.

I admire that headmistress. Now as a principal of my own school, I especially admire the trust she put in me as a teacher, even though I didn’t even speak the same language as her students. As educators, we had an understanding that we needed to help the students in that moment. I wasn’t treated like an honored guest on a pedestal; I was treated even better, as if I were a part of their family.

5 thoughts on “Subbing in Thailand”