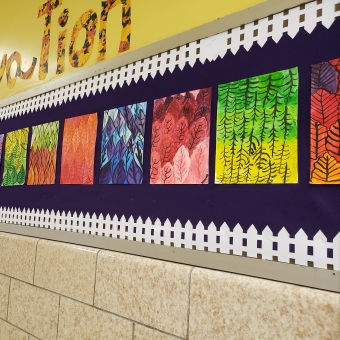 In most high schools, something very dramatic happens every 45 to 60 minutes: students transition from one class to another.  A school that seems peaceful and quiet while everyone is in class, suddenly erupts as hundreds of teenagers are in the hallway.

When my school first opened in 2011 with 90 students and 4 classrooms, those transitions were easy.  However, as we grew to almost 400 kids in 16 classrooms, 2 floors, and multiple hallways, transitions became harder to manage.  Students would engage in longer and longer conversations with their friends, or kiss each other on both cheeks and squeal as if they hadn’t seen each other for years. Some kids would just stand, and not move.  (That drove me crazy.)

“Go to class, come on,” my staff would beg and drone as we tried to corral kids to move.  What was supposed to be a 2-minute passing time often became 4 to 6 minutes.

All I said was the amount of time.   I didn’t say, “Move faster,” or “Please keep walking.” I just said the number of seconds left before class started.

It worked magically.  Kids picked up their pace, even dashing to class in the last ten seconds.

However, as impressed as my staff was, some were skeptical: “OK, it worked for you, but you’re the principal.  They listen to you.”

I asked one of my support staff to try it.

He did: “Students, you have 2 minutes.  One minute, 45 seconds.  One minute, thirty seconds.”  It worked again.  Once the countdown started, no matter whose voice it was, kids responded, and moved.

Now our transitions are 2 minutes long, versus 5 minutes long.  We found that we have a few stragglers, and for them, we do a “late countdown” in which we say, “10 seconds late, 20 seconds late,” up to a minute, and then ask the teachers to coach those students.

In the book How to Talk so Kids Can Learn, a strategy is to give directions or reminders in as few words a possible.  For example, if a student hasn’t picked up his pencil to start writing, the teacher can say the noun, “Pencil,” rather than “Pick up your pencil,” or “Start working.”  With the last two directions, a student could argue– “I did!” “Just give me a second, jeez!” “I am working!”  However, it’s hard to argue with the word “pencil.”  Similarly, it’s hard to argue with “30 seconds.”

Since we started doing the hallway countdown, students have gotten to class faster, and as a result, have spent more time learning.   As a staff, we are less stressed.  We’re not yelling, pleading or begging with students to go to class.  We’re not even asking.  We’re just giving information about time, as plain, neutral, and indisputable as 2 + 2 = 4.