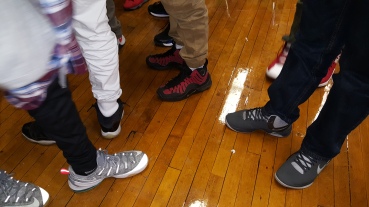 In one of our English as a New Language classrooms,* students were given index cards with the task “Describe yourself in six words,” and then instructed to post the cards on a bulletin board.  The cards said so much: “I miss my friends in Vietnam,” “I want to be a doctor,” “I think more than I speak.”  One was written by Carlos, who came to this country last year from the Dominican Republic: “The things are not so easy.”

I related to Carlos’s sentence because earlier that day, we had our first 9th grader drop out of school.  This was not my preference.

Talisa came from Cameroon at age 18 and was placed in our school in the 9th grade by the Office of Enrollment, as she had not attended school since junior high. She attended our school for about four days, then stopped coming altogether.  We met with the family and did our best to re-engage her, but this week, her father said he wanted her to drop out so she could attend night classes in English for adults and work during the day.  It also seemed to be what Talisa wanted.  Her father said he never wanted to register her for public school and only did so because he was pressured by his family.

We recommended other public schools tailored for older students that had evening programs.  He wasn’t interested: “That will be too hard for her.  She just needs to start with basic English, not all the subjects.”

And so goes the class of 2020: our first dropout in September 2016, which will be reflected in our numbers for four years, including our graduation statistics in 2020.

Later that day, I sat in a circle of 19 ninth grade boys from Yemen in the 9th grade who ranged in age from 14 to 18 years old, along with several boys from the upper grades who were serving as mentors and leaders to this group.  Some have lived here for several years and speak English well, but many just arrived as refugees, their families fleeing Yemen with nothing.  Those who are in the 9th grade at ages 17 and 18 are there because their schools closed down and they can’t retrieve their records, so we can’t put them in a higher grade.  Others waited with their families in limbo in Egypt or Algeria for months, waiting to get a visa to travel to the United States.

For these students, the things are not so easy.

In the meeting we let them know we’re here to support them, and to help them create a culture of supporting each other.  We had everyone introduce themselves and noticed some giggling when students struggled to say “My name is. ” Teacher Ali Boulaalam, assistant principal Yan Wang , and I quickly established that this wasn’t acceptable.  As we went around the circle and students introduced themselves, they started to encourage each other. The giggling got less and less, the encouragement more and more.

Ahmed, a 10th grader who has established himself as a leader, said, “Miss, what if we stay after school and help them?  We could help them learn English and tutor them so they understand what their teacher is saying in class.”

I looked at the group.  “Who would stay if we offered you a room to study?”

The entire room raised their hands.

Maybe things are easier than they appear.

What’s right for Talisa might not be what the education world thinks is best, but she’ll learn English with adults, get a job where she feels useful, and make her way into her life  at a pace that feels right for her.

For me, it can be tempting to distract myself with statistics I can’t control.  To worry, for example, about our 2020 graduation rate.  But then I’d miss the liveliness and urgency of working with 373 diverse students and 41 devoted staff members– right now.  It would be a way to avoid the challenges of helping teachers help students who have trouble sitting still, or who never learned to read, or who are frustrated because they failed an exam more than once.

Rather than worry, I’ll bring my focus back to creating a school where the things seem a little easier for Carlos, and  everybody else.

All the names and details of students have been changed.

6 thoughts on “The things are not so easy”