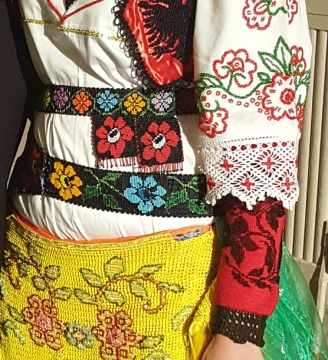 A student in traditional Albanian dress.

I am the principal of a truly multicultural school: almost all of the students in my school are newcomer immigrants from over 23 countries all over the world.

Three years ago, we started a tradition of having “cultural assemblies” in which students from each culture would lead a school-wide assembly sharing the history, music, dance, dress, and customs of their culture.

This year, we started with the Albanian assembly.  Our Albanian population is relatively small, and deeply proud of their culture.  My staff had always told me that the Albanian assembly was beautiful but at times, the most challenging to organize: the students are brilliant and dynamic.  However, the students also have strong opinions and disagreements about their history and traditions.  The week before the assembly, passionate arguments would break out among the students regarding everything from how to display their flags, how to depict their history, to how to do a traditional dance.

This year, I decided to open the assembly differently: rather than starting with Albania, I asked the teachers to organize a brief introduction to every culture in the school.  Standing in a line on the stage, one student representing each country would say, “My name is____, I am from ____” in English and in their native language.  As they spoke, we’d project a slide with name of their country, their flag, and a map of their country.  We’d start the year of assemblies by including and welcoming everyone.

All seemed well until the day before the assembly.

A group of Albanian students stormed into my office.  Two boys seemed particularly angry: “We want to start with Albania, not all those countries!  Why are you starting with a student from each country?  You never did that before!  If you keep that part, we’re not performing.”

I thought about it: what harm would it do?

A lot, I realized.  While I felt the boys were expressing genuine pain over a war which had deeply affected their families, my obligation was to take care of all of my students in a multicultural school.

And, I suspected, there was another tiny issue: the boys were nervous about dancing and performing in front of the entire school. Creating a reason to not dance, and blaming me, could be an escape.

“We’re going to start with all of the countries,” I said.  “If we do that, all of our students will feel welcome and they’ll be more likely to be respectful and listen during your assembly.”

The boys didn’t like my answer.  They stormed out of the school.  Left behind, a few of the girls began to cry: they had prepared their performances for weeks.

“I think they’ll come around,” I told the girls.

I found the boys practicing early the next morning in the auditorium.  I said nothing to them, seeing it was best to leave the situation alone for the moment.  I also suspected the girls had exercised some skillful diplomacy and persuasion.  Long term, I saw that we needed to address their feelings about their history so that they could fully participate in a multicultural school, city, and country.

At the beginning of the assembly, it was touching and inspiring to see 25 diverse students standing on stage.*  We started with Albania and ended with Yemen and Dominican Republic, which was strategic on the part of the teachers: we’d be honoring that the assembly was Albania’s by starting with them; and as Yemen and the Dominican Republic are our largest populations, we would end with them so that students from other countries wouldn’t have to follow the loudest cheers.

The student audience was inspiring: they cheered equally loudly for each country, not just their own.  Some countries are only represented by 1-3 students in our entire school, such as Guinea or the Philippines, but our students showed enormous support no matter what the country.  When a tiny 9th-grade boy from Senegal practically whispered, “I am from Senegal,” the audience erupted in cheers to support his courage.

The Albanian students performed beautifully.  An Albanian teacher delivered a funny presentation that fully engaged the audience.  Students were unusually attentive during the rest of the assembly,  more than we have seen in other years.  The introduction had an impact: it said, “You are all included and welcomed here.”

2 thoughts on “From Albania to Dominican Republic”