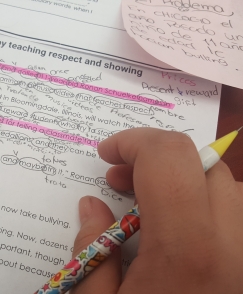 Luciana is a 9th grader who arrived in the U.S. in 2016 from the Dominican Republic.  She wears a sparkly pink headband, has perfect attendance, and occasionally causes mischief.

I saw Luciana in her 9th grade English class.  The students were reading an article about bullying. When the teacher encouraged Luciana to answer a question about the article, Luciana immediately turned to several Spanish-speaking classmates with a panicked look that said, “Please translate!  Don’t leave me hanging here!”

Our school is for newcomer immigrants who speak English as their second language.  Luciana is part of the 55% of our students who speak Spanish as their first language, coming from the Dominican Republic, Mexico, Ecuador, and Honduras.  Another large group of students are from Yemen, and speak Arabic as their first language. The rest speak Bengali, Albanian, French, Chinese, Italian, Vietnamese, etc.  The number of languages makes it a rich environment, and we encourage students to include their first language in in their learning, and as a springboard to English.  However, the students who speak the less-spoken languages in our school tend to learn English fastest.  If no one else in your class speaks Vietnamese, or Albanian, you’re forced to use whatever English you have to communicate, and you improve.

Our Spanish speakers are rarely in a position where they don’t have an instant-translator: they just have to look imploringly at a friend when they’re confronted with English, and the friend will translate.  And I can empathize.  When I was 15, I visited my father’s family in Spain, none of whom spoke English.  I barely spoke Spanish, having had one year of high school Spanish.  I remember feeling frustrated and embarrassed when I couldn’t communicate.  If I had had an instant-translator friend, I might have latched on and not let go.

In some ways, I could also see how hard Luciana was trying to learn English.  The teacher was showing the class how to annotate an article by circling and translating unfamiliar words.  On Luciana’s paper, almost every single word was circled and translated.  She seemed to be enjoying the translation and taking pride in it, and while I was pretty sure she didn’t need to translate words like “music” (which is “musica” in Spanish), I was touched by her effort.  It must have taken her a lot of time to look up all of these words; she cared about knowing what she didn’t know.  Yet when confronted with the task of actually listening to and speaking English, she quickly went into “panic” mode and looked for a friend to translate.

Later that day I visited a 12th grade English class working in groups to read and analyze a poem. One group of students was made up of native Spanish speakers, and they were discussing the poem entirely in English.  Later, when I heard one student slip into Spanish, another said, “English, please!” They laughed and quickly resumed their discussion in English.  I knew partly how this had happened—visiting the class several times, the teacher had worked hard to establish a culture of English as the common language.  However, Luciana’s 9th grade English teacher had worked similarly hard to encourage English in her class.  The difference?  Our students aren’t just learning English because they moved to the United States; they also need to pass a state exam in English in order to graduate, and while our 12th-graders probably knew this in the 9th-grade, they felt it in the 12th-grade, so close to their graduation.

I left the class wondering how we could create a culture earlier-on in which learning English is not just done out of necessity, but out of genuine desire, curiosity and because it’s the cool thing to do.

All of the names of students have been changed.

2 thoughts on “Please (please!) translate for me.”